And here they is:

Had to do some modifications on the coop since chickens are bigger than I thought they were : }

But it ended up looking pretty good.

The entrance is now on the front.  And as you can see they look pretty darned happy with their low rent country shack.

I am happy too, after the back and forth for weeks trying to figure out where in the world to

put the coop, I picked just the right spot.  It has been in the 100s so I was afraid of ending up with

fried chicken if I put the coop in the sun.  Here they have the shade of 2 oaks and a laurel.

Me in my natural habitat.  I put up some shade sails over the house because it has been so very hot this summer.  I attached them to this tree which meant I got to climb.  The view from two stories up is amazing.  I’m thinking a tree house would be great.  Or maybe not since that would require more building and I’m soooo over that!

The hot weather brings out the snakes.  Found kitty playing with this one.  She had a confused look on her face like she couldn’t understand how something so skinny could make so much noise.

Yesterday’s breakfast.  Today I had an omelet:  potatoes, tomatoes and basil from the garden and eggs- still warm- from out under the chickens.

And my garden is finally getting good.  Started using the urine from the chamber pot and now everyone is nitrogen happy.

Amending my ways with horse and llama poo too and will make a worm bucket this week since I prefer that kind of composting.  (Because I’m lazy.)

That said, I was just gifted a whole bunch of plants from a fellow tiny house dweller (his is not on wheels but is a fine specimen and possibly smaller than mine). He looks like my friend Paul and they both have people tell them they look like Sean Penn.  Weird world!

Don  (Sean Penn #3, counting the original of course)  gave me:  Beets, lambs quarters, beans, comfrey etc. and hooked me up with a horse poo connection.   Lovely!  And Richard keeps coming with the flowers which are making my bees so very happy.  If it was up to me there would be no flowers in my garden since I seem to know nothing about making them grow.  Overly focused on the veggies I guess.

You all may be wondering where I’m at with my goal to finish building by August 1st.  Uh, the to-do list is very long but I’m on it baby!  Bunny has given me an ultimatum.  She is done living in a construction zone!

Enough with the drilling and sawing ma! Im TRYING to take a NAP!

Just realized I never posted pics of the big event.  Which big event?

The getting running water in the house after a year and a half event!
Can’t believe I left you all out of that.  I’m juggling so many projects and doing so many things that I don’t even know what I’m doing anymore.

So here is the before and after in one shot.  Upper right looking out of window you can see the tiny garden sink in distance by fence.  That is the old location for washing dishes and brushing teeth etc.

Here is the new and improved sink.  Perry testing it out after we undid everything and re-did the second time because of a leak.

“Wow!  Look at you all civilized with running water!”

Since he has lugged a pan full of dishes out to the field to wash them on more than one occasion I can see why he would be about as happy for me as I was.

Complete with tile and everything.  Used tiles that look like wood for the majority mostly because it meant less grout and because they were the EXACT size of the counter top and have a nice rustic look. Also they were cheap!

Used the Schluter Kerdi water proof membrane because I stumbled upon it in a local tile store.  And the fellow who works there, Jerry, was so confident I could do it myself and was so encouraging that I figured it was meant to be.  Yay Jerry!  You were right.  I almost have it done and it wasn’t nearly as bad as I thought it would be.

Here it is with the paper off.  I’m still figuring out how to do the next step which is grout and sealing.  Now that it’s 100 outside the garden shower is fine so got busy with chickens and bees and garden and left this project for a bit until I figure it out.  It has running water hooked up just gotta  finish making it waterproof!  Just so the shower wouldn’t be all orange on its own I got some old cabinet doors from dump and painted them to go under the couch.  Much better than the curtain I had. And I cut a little kitty door in one end. 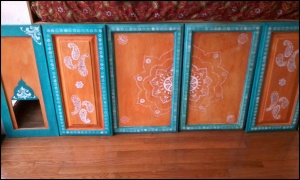 I also Re-did the closet door and forgot to tell you all about it.  used shelving wood and bits and pieces of Indian trivets etc from thrift stores.

Opens and closes with bi-fold hinges and looks much better than the last door I made.  My carpentry skills are definitely improving.

What else have I left out?  Oh, the other day the bees were freaking out and I went over to see what was up and there was this giant (by california standards, puny by Brazilian standards) beetle sitting on top of the hive.  It was actually kind of pretty despite the  creepy mega long antennae.

The bees were definitely feeling threatened so Pacifico put it in a cup and took it down the hill.  It probably beat him back up since apparently it had wings. Which I didn’t know or I would never have gotten so close to it. 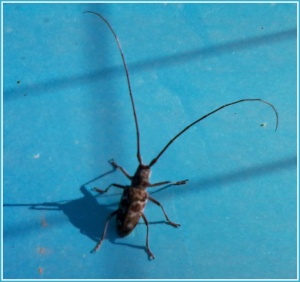 It looks small here but I wasn’t about to put my hand in the shot for reference.  It was about 1.5 “long with 2 ” antlers, horns, creepy tendrils.

So now you are up to date.  Hope to have the other 200 things, on my list of projects to finish, done soon.  Will keep you posted!